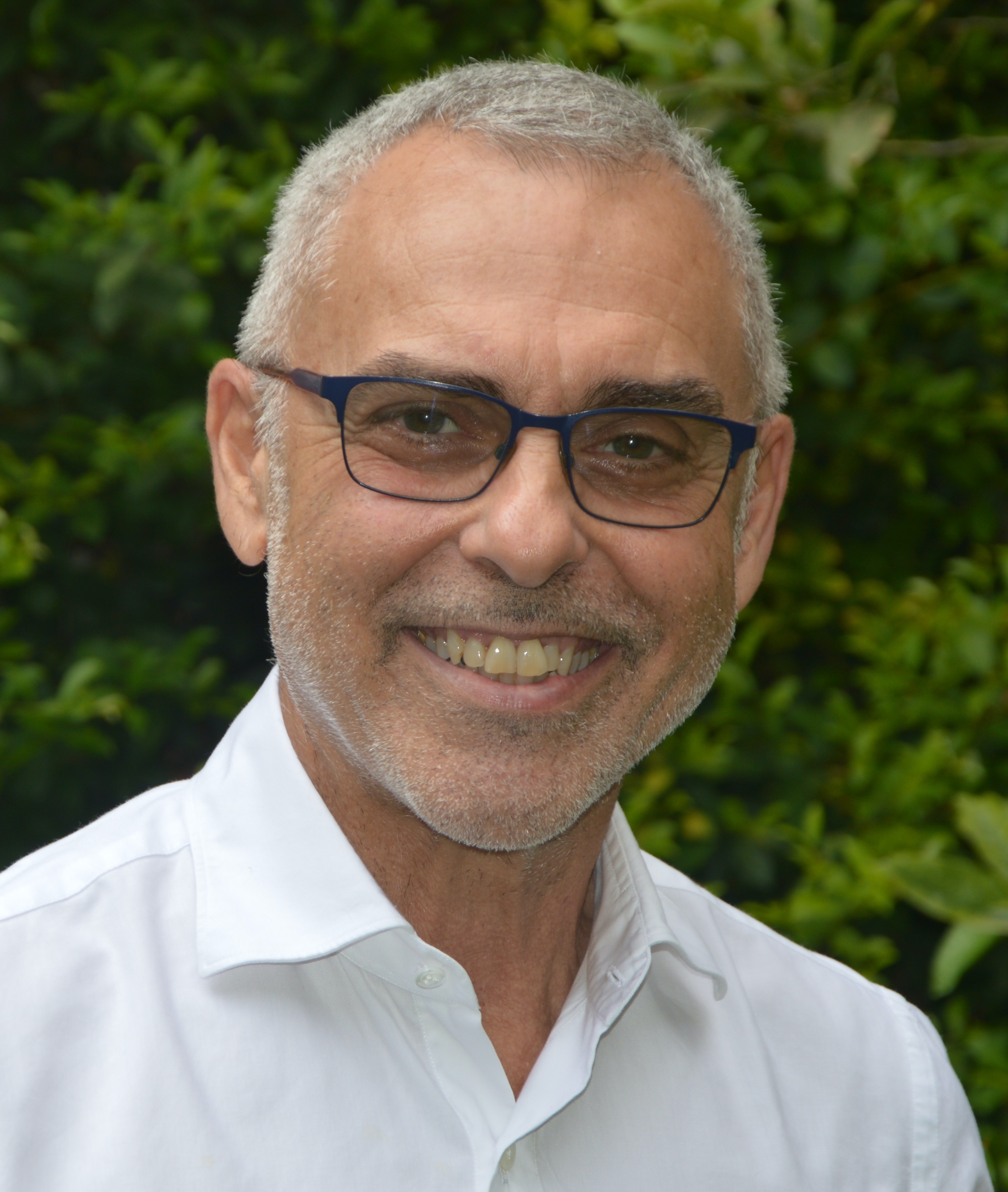 Roberto Purrello was born in Catania on April 12, 1956. In 1979 he graduated in Chemistry at the University of Catania (with 110/110 cum laude) and began his training as a researcher in the field of Bioinorganic Chemistry. In 1983 he became a University Researcher, and in 1988, thanks to an annual CNR scholarship, he joined the group of Prof. Thomas G. Spiro in Princeton (Princeton University, USA). In 1999 Princeton University offered a position as Research Assistant that allowed him to consolidate and deepen the research in progress. In this period, he became interested in rare structures of nucleic acids and proteins and began to study the chemistry of porphyrins in aqueous solution.

In 1991 he wins the national competition for Associate Professor and returns to Italy, and starts a collaboration with Prof. R.F. Pasternack (Swarthmore College, PA, USA) pioneer of porphyrin chemistry in aqueous solution.

In 2000 he was Visiting Professor for six months at the University of Davis (Davis, CA, USA) where he taught two Chemistry courses (highly appreciated by students) and began a collaboration with Prof. M. G. Vicente with whom he published the first, counterintuitive evidence that anionic porphyrins interact with DNA.

In the same year he won the competition for Full Professor.

In these years, in addition to the study of porphyrin-DNA interactions, he also began to be interested in the aggregation processes of porphyrins in aqueous solution with the aim of opening new paths to non-covalent synthesis of complex species in a benign solvent like water. In the same period, he begins to study some fundamental aspects of the origins of life and, in particular, the amplification of supramolecular asymmetries. The originality of these research themes has opened up unusual research scenarios whose international impact is evidenced by the participation in various COST projects. Since 2003 he has been collaborating with Prof. Nina Berova (Columbia University) for the study of rare DNA conformations.

In 2005 he was awarded the "Lady Davis Fellowship" by the Technion (Israel). From 2011 to 2015 he was President of the "Division of Chemistry of Biological Systems" of the Italian Chemical Society. In 2012 he was member of the Panel of Evaluators, GEV, of ANVUR for Area 03 (VQR 2004-2011) and of the ASN commission 2012-13. He held the role of Coordinator of the XXVIII cycle of the Doctorate in Chemical Sciences and from 2014 to 2020 he has been Director of the Department of Chemical Sciences. Since 2015 he is the representative of the Area 03 Full Professors at National Council of Italian Universities (CUN); a Ministry council.

He has published more than 120 publications (citation >  4000) and an h index of 41. He is a member of the Editorial Board of the journal "Chirality" (Wiley), and referee of several international journals (Nature Communications, Nature Materials, JACS, Angewandte Chemie , Chem. Communications, Chemistry, etc.).

•       PREVIOUS POSITIONS IN ITALY AND ABROAD

2012 - 2014     Coordinator of the Doctorate in Chemistry, Department of Chemical Sciences, University of Catania

2007-               Co-organizer and member of the scientific committee of annual meeting of the Division of “Chemistry of Biological Systems” of the Italian Society of Chemistry.

2012                Co-organizer (together with Prof. Nina Berova, Columbia University, NY, USA), at ICPP-7 of a Symposium titled “Porphyrins and phtalocyanines in Chiral Molecular and Supramolecular Systems”

My main research interests are related to noncovalent syntheses of multi-porphyrin (discrete) species to transfer “information” from a molecular to a supramolecular level. Much attention has been devoted to the transfer and modulation of chirality from chiral templates to achiral molecular or supramolecular entities.

One of main goals is the achievement, in aqueous environment, of synthetic non-covalent methods able to approach the precision (in terms of sequence and stoichiometry of the components) and reproducibility of the syntheses carried out in non-aqueous media. This is a very challenging but worthwhile goal because of the remarkable advantages it may introduce. In addition to their basic impact on the understanding and mimicking of Nature, non-covalent syntheses incorporate, in fact, green chemistry goals. Among them:

i)       The integration of all the material used in the process into the final product,

ii)      No energy requirement; chemical energy stored in the reagents is enough to lead the process to completion and, most importantly,

iii)    Water - a benign and inexpensive solvent - is an excellent medium for these processes and is easy to dispose of.

An additional goal of my research is to attain the control and tunability of supramolecular chirality.

Induction, memory, (self-) propagation and On-Off switching of supramolecular chirality.

The aim of this research topic is the study of the induction, transfer and propagation of chirality. These studies are relevant both for the understanding of the homo-chirality of Life and for technological applications spanning from non-linear optical devices to membranes for racemate resolution. In a seminal paper we demonstrated that the chirality induced by (L- or D-) poly-glutamate onto cationic porphyrin assemblies can be further transferred to anionic porphyrins (Inorg. Chem. , 37, 3647, 1998). This system is the first example of chiral hetero-aggregates obtained by transferring chirality from a chiral template (the anionic polypeptide) to an achiral dye (the cationic porphyrins) and, eventually, to a third achiral component (the anionic porphyrins, which, on the other hand, cannot interact with the anionic template). This approach has been further developed, leading to the synthesis of porphyrin hetero-aggregates (onto poly-glutamate) able to retain the memory of the induced chirality even after the poly-glutamate chirality is switched off (J. Am. Chem. Soc., 120, 12353, 1998; J. Phys. Chem., 104, 10900, 2000). In another contribution, in this field, we used aromatic aminoacids as templates (J. Am. Chem. Soc., 124, 894, 2002).  In this paper we have reported the first evidence that aminoacids form in aqueous solution (millimolar concentrations) quite large chiral clusters (about 106 aminoacid molecules per each assembly molecule). These non-covalent precursors of proteins show the same behaviour of poly-glutamate and address aggregation of achiral porphyrins towards the formation of “smart” chiral assemblies of opposite charged. Noteworthy, the “induced” chirality of these porphyrin aggregates is maintained even after the chiral template (the aminoacids) removal by ultra-filtration. Therefore, the imprinted porphyrin assemblies are now inherently chiral. This did suggest us to use the templated chiral porphyrin assemblies (i.e.; in the absence of aminoacids) as chiral cast for other porphyrins. Indeed, porphyrin addition causes the increase of the CD signal. These aggregates, then, not only memorize but also transfer their chiral information with a 100% yield. This chiral bias occurs through a correlated sequence of induction, memory and amplification of chirality that recalls prebiotic scenarios.

By exploiting the unique properties of these assemblies (inertness and self-catalytic growth, J. Am. Chem. Soc., 130, 10476-10477, 2008) and substituting the four permanent charges in the periphery of the cationic porphyrins with four inducible charges (by protonation) we were able to disassembly and reassembly the aggregates allowing for cyclically erasing and rewriting the chiral memory of the imprinted aggregates (J. Am. Chem. Soc., 129, 8062-8063, 2007).

Finally, we have shown that also inorganic chiral complexes (in our case the ruthenium(II) complexes) can cast chirality in porphyrin aggregates and this pave to way to hybrid organic-inorganic supramolecular complexes in which in addition to chirality it is possible transfer energy or electrons (Angew. Chem. Int. Ed., 47, 9879-9882, 2008). Also these complexes retain memory of the chirality imprinted from the inorganic mould and, also in this case, chirality can be cyclically switched on and off.

Multi-metalloporphyrin systems have been extensively investigated for their numerous applications as supramolecular devices (e.g. as antenna systems). To the best of my knowledge, we published the first example of self-aggregation of water-soluble porphyrins leading to species having a well-defined and tunable stoichiometry (Angew. Chem. Int. Ed. Engl., 40, 4245, 2001). An extension of this work led to an unprecedented, simple non-covalent synthesis (in aqueous solution) of multi-porphyrin complexes for which it is possible to manipulate both the stoichiometry and the sequence. This type of noncovalent synthesis presents the same “accuracy” of the covalent approach, and a 100% yield, but it is not as time-consuming as the latter method (J. Am. Chem. Soc., 124, 14536, 2002, Chemistry-A European Journal, 12, 2722-2729, 2006).

In order to get also the control over the dimensionality of the aggregates, we have extended our investigations to the bis-calixarenes. This approach turned out to be successful and we demonstrated that it is, indeed, possible to choose between aggregates grown in the x,y or x,y,z dimensions. Also in this case, we have the perfect control of sequence and stoichiometry and we can assemble 33 molecular “pieces” in about 10 hours, with a yield higher than 90% (Chemistry-A European Journal, 16, 10439-10446, 2010).

Finally, very recently, we succeeded in accomplishing the final goal by getting the control over the chirality of the porphyrin assemblies, both by a pure covalent and a mixed covalent/noncovalent approach (Chem. Comm., 48, 4046-4048, 2012).

Interaction between porphyrins and nucleic acids are a very studied topic owing to the clinical use of these macrocycles in the cure of cancer by photodynamic therapy. Yet, following the pioneering studies of Prof. R. F. Pasternack (Swarthmore College, PA, USA) another interesting use of porphyrins is as chiroptical reporters of conformations.  These molecules are ideal chiroptical reporters because; i) their absorption is far from the region where bases and aminoacids absorbs light and ii) they are not chiral, then even a small induced CD signal is already an useful indication of the DNA structure.